How do we achieve net-zero carbon in property industry? Reducing emissions is the most obvious path to take.

RealEstat.id (Jakarta) - Based on the Paris Agreement goal’s, world leaders have agreed to put a limit on global temperature from rising not to exceed 1.5 degrees Celsius above pre-industrial levels by the end of the century. Blowing past 2 degrees Celsius would create cataclysmic results.

Based on the Global Status Report for Buildings and Construction 2019, the property and construction sector is currently responsible for almost 40% of final energy use and process-related carbon dioxide (CO2) emissions, and thus, has a critically important role to play in meeting international goals under the Paris Agreement.

According to the Deloitte article written by Michael Müller, Thomas Krick and Dr. Julian Blohmke, the major contributors to these emissions are the materials used as well as the heating, cooling and lighting of buildings and infrastructure.

How do we achieve net-zero carbon in property industry? Reducing emissions is the most obvious path to take. The Global Status Report for Buildings and Construction 2019 also mentions that property owners have three Rs to pursue in achieving the targeted outcome(s):

• Renewables
A short-term solution requiring lower capital expenditure (CAPEX) rather than other emission-reduction measures. Property owners can achieve this by switching their energy usage to renewable energy.

If the property industry was to be more dependent on renewable energy, it would push Indonesia to consume more expensive technology produced by developed countries. Realistically, given the expensive cost of technologies combined with currencies that continue sliding lower, developing countries will be in a difficult position to reduce their carbon emission from their property and construction industries.

The commitment to net-zero emissions in property industry also requires a lot of financing. This financing does not come cheaply. There are two major barriers that developing nations must face when calculating how to reduce energy emissions. First is the high-interest rate environment, and second is depreciating currency.

Without any tangible and immediate benefits, such as immediately higher rents or the ability to attract class-A tenants, the funding costs will hinder property owners from retrofitting their buildings. The other barrier is weak and depreciating currencies. If property owners decide to buy the newest technology and they do not receive foreign currency as revenue, it will be extremely expensive.

Government policy is the building block needed to support the three R initiative. Policies need to incentivise property owners to retrofit their buildings—policies such as lowering property taxes or corporate income taxes for property owners with structures that will be retrofitted. For new development projects, governments need to allow higher density development, provided that developers design their buildings to meet green building requirements.

So, what is the future for net-zero emissions in Indonesia vis-à-vis the existing and future property supply and renewable energy solutions? We need to look at local resources to solve this problem. Geothermal energy is expected to play a significant role in reducing Indonesia's greenhouse gas emissions.

As a clean and renewable energy source that provides power continuously, geothermal can reduce the country's dependence on coal-fired power and other fossil fuels. The massive investment and scaling-up of the geothermal power plants would be the key, not only to reducing our dependency on coal, but to reducing pollution.

The steps of scaling up geothermal energy are already underway. Based on the press release published by the World Bank on September 26, 2019 it is mentioned that Indonesia now has 1.9 gigawatts of installed geothermal power and plans to develop an additional 4.6 gigawatts to help meet the government’s target of renewable energy.

Indonesia is also one of the major producers of nickel, a building base of EV batteries. Using local resources will soften the blow of the depreciating currency problem. Recently, two Korean companies made significant investments in building EV factories. The abundant supply of EV batteries would allow property owners to retrofit their buildings and depend more on solar energy.

In the power sector, Indonesia has an ambitious short-term plan. Indonesia aspires to boost “new” and renewable energy supply to 23% of its primary energy mix by 2025, and to at least 31% by 2050 as can be seen in the report published by Bloomberg NEF on September 2021.

The government includes a wide range of technologies such as nuclear, hydrogen, coal bed methane, gasified coal and liquefied coal in its definition of new and renewable energy supply. If Indonesia prioritises renewables for its 2025 target, this would be a significant step up from the 13% renewable energy penetration in Indonesia’s 2019 primary energy mix.

In closing, while the property and construction industries face many challenges in reducing the carbon footprint in Indonesia and other developing countries, the most effective ways forward will be property owners’ adoption of the three Rs, the government’s adoption of national power policy with the use of local materials and resources, and government support through tax incentives. 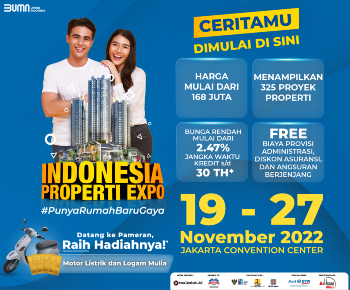